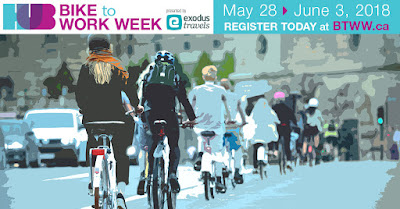 Bike to Work Week is upon us once again!

Perhaps this is something you would like to try, but you aren't sure about a good route to take through Maple Ridge and/or Pitt Meadows? We might be able to help. If you need advice or tips on how to make a commute by bike work for you, send an e-mail to mapleridge-pittmeadows@bikehub.ca.

You can register for Bike to Work Week here. This is also where you log your daily trips, for a chance to win one of five daily bike giveaways and over $10,000 in additional prizes!

Visit one of the celebration stations in our area for a drink, a snack and a chat:

Hope to see you at one of these stations!
Posted by Jackie at 10:31 PM 2 comments:

Our meetings are on the second Thursday of the month.
Location: Maple Ridge Library, Alouette Room (upstairs).

UPDATE: This ride took place in May 2018, in case you're arriving here afterwards. Don't worry though; we're planning to host this ride again in summer 2019 - come back for details!

We're hosting a community ride in May to show off some bike routes for getting around Maple Ridge. Not everyone is a seasoned cyclist and/or knowledgeable about our local network of bike paths, lanes, and routes. For newer cyclists, the routes you might take using a motorized vehicle probably aren't appropriate for use with a bike. It can also be intimidating to ride a bike in traffic. This ride is about sharing routes you may not know about to get from your neighbourhood to shopping, restaurants, and recreation, and to give you a chance to try out the routes as part of a guided tour.

Our route takes in downtown Maple Ridge and areas to the west. We call it "Maple Ridge 101" as it uses some of our most-used paths and goes near a lot of popular destinations. We'll meet at the Bandstand at Memorial Peace Park, cycle through downtown, head past the hospital toward Hammond, then head north past Westgate, turn east, and head back into downtown, finishing at the Witch Craft Pub for refueling and socializing.

The ride is Sunday, May 20, 2-4 PM. This is an inclusive, casually paced ride. For legal reasons, we must ride in groups with a maximum size, so it is important to register and not just turn up at the event so we know how many riders to expect. To register, visit the event page and sign in or sign up.
Posted by Michael Nelson at 11:50 AM 1 comment:

At Council Workshop on January 9, Maple Ridge Council had a discussion on two recommendations by the Active Transportation Advisory Committee. Here is the link to the recordings of the meeting.

1.  to ban cycling on the sidewalk on: 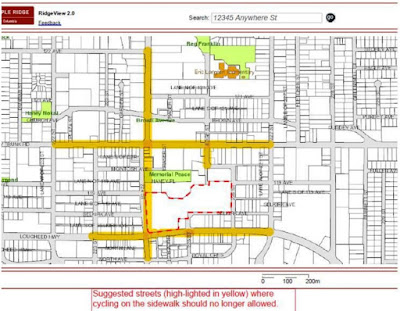 The discussion on cycling on the sidewalk starts at 1:57.

This issue will go back to the Active Transportation Advisory Committee, with the request to look at extending the section of 224th to North Ave. to the south, and 122nd Ave. to the north, and also to look at the feasibility of reducing the speed limit on Dewdney.

Regarding cycling on the sidewalk:

In principle it's a good idea not to allow cycling on the sidewalk. The problem, however, is that cycling on some of these roads is too dangerous, and people on bikes tend to disregard any laws that will put their lives in danger.

For some reason the Active Transportation Advisory Committee decided to recommend to apply the changes to the by-law only to bikes, but not roller blades and skateboards. Coun. Masse would like to see those added.

Note especially the comments by Coun. Shymkiw, at 2:06. He would like to ban bikes altogether, as he feels they're the cause of all congestion and greenhouse gas emissions in Maple Ridge!

All but Coun. Speirs are in support of the cycling ban on the above mentioned sidewalks.

I sent the following personal comments to Maple Ridge Council:

I would like to make the following comments after listening to Council members' comments  made during Council Workshop of January 9 with regard to banning cycling on the sidewalks on certain sections of streets in the downtown core.

First of all, it's nice to once again hear the voice of reason: thank you Councillor Speirs, for standing up for the needs of people on bikes of all ages and abilities, and for a healthier, more livable city that works for everyone, not just for those in cars!

The topic of cycling on the sidewalks has come back time and time again over the past decade since the by-law allowing it in Maple Ridge came into force.

I'll just repeat some points that our HUB Committee has tried to explain to respective Councils over the years:


I sincerely hope that this will not distract the RCMP from dealing with the more serious dangers on our roads: speeding, distracted driving and otherwise irresponsible behaviour by drivers who can and do kill and maim their fellow road users.

I totally understand the concern that especially elderly pedestrians have with those riding their bikes on the sidewalks "zooming" along with no consideration for the safety of others.

However, somehow the concerns that people on bikes have about hostile, aggressive and inconsiderate behaviour of some drivers (it only takes one!) continue to be entirely ignored by the majority of members of Council. As Coun. Speirs rightly stated: "there's a big difference between being scared as a senior and being dead as a cyclist".

A few more years and I'll be part of the senior demographic myself. I find it totally incomprehensible that my life only appears to matter as a pedestrian, but is seen as expendable when I happen to be riding my bike, senior or no senior. I've met numerous seniors who get around by bike, whether by necessity or by choice. I think they should be enthusiastically welcomed to our downtown, and they should be encouraged in their efforts to keep active and healthy for as long as they possibly can. We're making it pretty darn difficult for them sometimes!

Hopefully, now that the decision has been made, we can move on and do more to make people on bikes feel more welcome and safe in our downtown, and to improve designated bike routes in the downtown core, which are still mostly no more than lines on a map. There should be more to a designated bike route than merely directing people on bikes away from the more convenient and busier routes, and to the routes with all the stop signs, where the cyclist is almost always required to give the right of way to the car.

I would further like to touch on some comments made by Coun. Shymkiw, who appears to blame bikes for congestion and increased greenhouse gas emissions due to "ripping out car lanes and replacing them with bike lanes". He's even of the opinion that bikes should be banned altogether. Some on Council may seem to find his comments hilariously funny, however, we're talking about human lives here, and I feel any comments made in a Council meeting regarding life and death issues should be taken dead serious.