Here are some photos of our annual Cycle Recycle at Earth Day 2014 in Maple Ridge:

The Joy of Cycling in the Netherlands

To give you an impression of what cycling in the Netherlands is like, read this blog post from the U.K. blog As Easy as Riding a Bike, and look at the photos of "ordinary" Dutch cycling infrastructure.
Posted by Jackie at 8:14 PM No comments:

Email ThisBlogThis!Share to TwitterShare to FacebookShare to Pinterest
Labels: As Easy as Riding a Bike, cycling infrastructure, Dutch, Joy of Cycling in the Netherlands 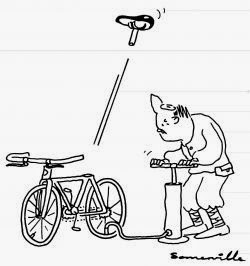 At the Haney Farmers Market, HUB volunteers will be teaching basic bike repair and maintenance to whoever wants to learn!

Update April 28: the first 25 people to arrive by bike at the market will receive a $5 coupon, donated by the Haney Farmers Market!

Posted by Jackie at 7:32 AM No comments:

Do you know the annual Art Studio Tour in Maple Ridge is coming up? It’ll take place on May 10th and 11th.

This year you have the option of joining members of our local HUB committee on our first Art Studio Bike Tour.

Where: The ACT, Memorial Peace Park

We’ve selected a nice variety of art studios along a pleasant route for this ride.  Length of the route is about 16 kms, so quite doable for the average person. You can expect some refreshments along the way, offered by the various artists, but you may want to bring along a small lunch and a water bottle as well, since we’ll be on the road for several hours.

Doing it by bike adds another dimension to exploring the arts scene in Maple Ridge. It’s just as much about enjoying the exercise and the outdoors as about discovering the amazing artsy talents in our community!

There is a small fee ($2) we will need to charge for this ride, which will cover a HUB membership for the day, which pays for insurance for ride participants. Update April 27: no charge for insurance. Members as well as non-members will be covered by HUB insurance (required by the District of Maple Ridge). All participants will just need to sign a waiver. Nevertheless, we always appreciate a small donation to help cover the cost of running our local activities, or you can consider an annual HUB membership which will help support HUB's activities throughout Metro Vancouver. A HUB membership will give you benefits such as discounts at local bike shops. Check out the HUB website for more info. You can join on-line.

We have been asked by the District's Engineering Department, the RCMP and the Fire Department to point out to participants that:
Arts studios that we’ll be visiting:
Pre-registration is recommended, but if you decide last-minute you want to join us, it's not a problem!

This is the approximate route: 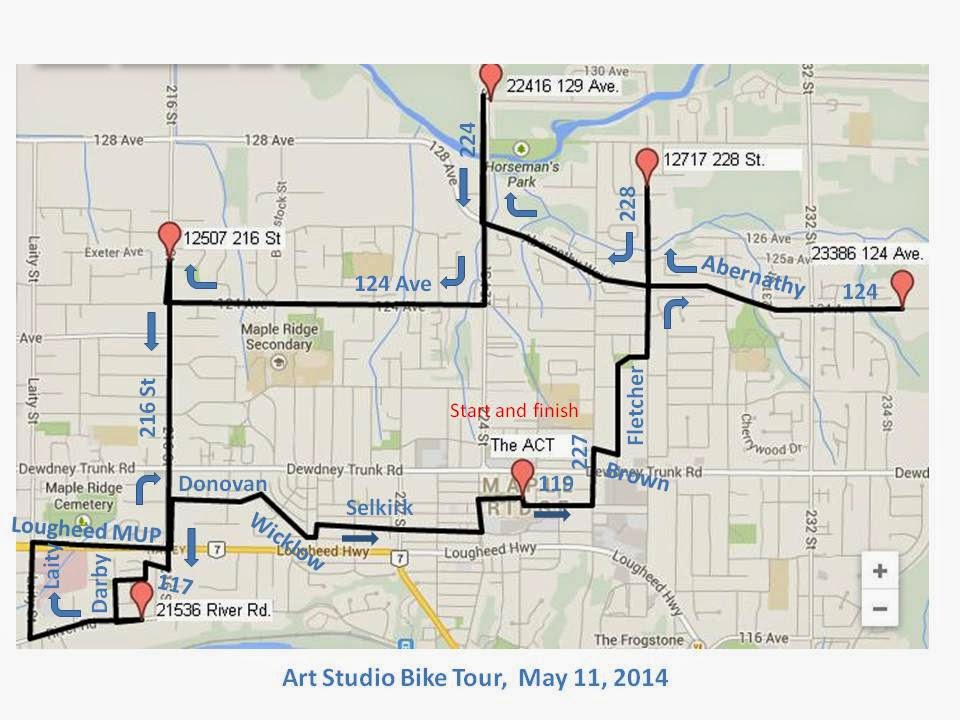 Posted by Jackie at 3:51 PM No comments:

HUB will be back at Maple Ridge Earth Day 2014 with our Cycle Recycle. The Earth Day event happens this year on April 26, from 10 am to 2 pm.

It looks like we may have more than 10 used bikes to give away.  Some kid's bikes, some adult bikes; a great selection.

I just found out today that we'll get a prime location this time in Memorial Peace Park instead of our regular, rather hidden location in front of the Leisure Centre; this time we'll be between the bandstand and the ACT, right in the middle of all the action.

Drop by in the morning to take a look at the bikes we have. Enter a ticket for each bike you're interested in. You can only win one bike though! The draw will be at 1:00 pm, by Lindy Sisson, Executive Director of the ACT. The winners of the bikes will have to be present during the draw; if not, we'll have to draw another ticket.

Some of the bikes may need some minor repairs, so we'll be busy with that in the morning. Good opportunity to learn something about bike mechanics!

We'll borrow the bike engraver from the RCMP Crime Prevention Unit. Good idea to have your name or driver's licence engraved on your bike. If it ever gets stolen, it'll be easy for the RCMP to find its rightful owner. Good reason to bike to Earth Day, if doing it just for the benefit of the environment and your health weren't good enough reasons yet!

To find out more about what's happening at this year's Earth Day, check out the information on the Ridge Meadows Recycle website, and the Celebrate Earth Day in Maple Ridge facebook page.
Posted by Jackie at 10:04 PM No comments:

My parents in the Netherlands sometimes send me articles about cycling, thinking that I can use it in my cycling advocacy efforts here in Maple Ridge. I just received the latest one, a big, 2-page article in one of the national newspapers, the Algemeen Dagblad, with an interview with Saskia Kluit of the Dutch Fietsersbond (the national cycling advocacy organization).

The Dutch rarely brag about their great cycling network. But it's something to be really proud of, and it makes so much sense for countries and cities around the world to follow in their footsteps, for so many reasons, whether it's global warming, oil dependence, livability, health....

Here's a summary of the article:

Nowhere in the world do as many people bike as much as in the Netherlands. Per resident they bike 900 kms annually. That's 15 billion kms per year.

Everybody in the Netherlands bikes, not only the the working poor, but also former Queen Juliana and the Prime Minister.

Many babyboomers like to cycle once they retire. E-bikes mean a lot for those over 60. They're a lot of fun, but they also help people with physical limitations to keep active. They offer freedom and independence. However, older people are more vulnerable and don't react as quickly as they used to, which leads to an increase in injuries.

The Netherlands boast almost 35,000 kms of bike path. Volunteers have developed an on-line cycle route planner which allows you to plan your trip from door to door. In the Netherlands you can bike just about anywhere. Drivers and cyclists understand eachother, since many drivers also bike.

But cycling has grown so much that the government has to think about the next step. Some bike paths are being used by thousands of cyclists every hour. In the big cities, but also in national parks on the weekends and during holidays. So bike paths need to be widened, and the cycling network needs to be refined. Sometimes you need to dare to say: the bicycle is #1 here.

Sometimes there's not enough support for the bicycle. Electric cars in the Netherlands presently number about 30,000, and are being subsidized by the government. Since 2009 1.2 million e-bikes have been sold, without any government subsidy.

Sometimes cyclists are being asked to be very patient during road construction projects that go on for years, and cyclists get temporary routes that are not great, such as the construction around the Central Station in Utrecht, which has already lasted for 10 years. Presently a large banner tells cyclists that "Change is gonna come - the station zone is building a car parking". And nobody tells cyclists: "thank you for being patient".

Lots of bike thefts are happening in the Netherlands: about 700,000 per year. Many people don't bike because they're afraid their bikes will be stolen. Saskia says: "Logistically, when the bikes of my two sons are stolen, it's a disaster. I have to drive them, give them money for transit, or let them use my own bike".

The average Dutch person will choose the bike for one third of his trips.

Saskia is on the Board of the Dutch Cycling Embassy, partners of which are the government, business and non-governmental organisations. They successfully promote the bicycle abroad, and there is so much interest that it's almost too much to handle all the requests for help.

Take for example Uganda. There it's not just about mobility, it's also about empowerment. You can walk 6 kms, but in that same hour you can also bike 20 kms. Your world gets bigger thanks to the bike. In Malawi, nurses have been given a bicycle, so that they can provide services more quickly.

The Dutch bike is special. You sit up straight. In many other countries people ride on more sporty bikes: mountain bikes, road bikes.

Somes things happen abroad that make Saskia jealous. For example China, which is the third-best cycle nation in the world, after the Netherlands and Denmark. Some cities in south-east Asia have bike shares with hundreds of thousands of  bikes. In Japan there's a system whereby your bike disappears into the ground; it's suspended in an underground storage area. When you pick up your bike two hours later, it's been nicely cleaned. In the Netherlands, we don't want to pay for that.

We still have to win over a world in the Netherlands. For example, immigrants bike less. Parents remember the danger from back home in Turkey or Morocco, and worry about their kids in traffic.

For immigrants, the car is often a status symbol. The bicycle isn't. So if you want to show your family that you're doing well, you need to put a big expensive car in front of your door.

Kids in the Netherlands are the happiest kids in the world. The difference is the bicycle. Saskia sometimes talks to parents who drive their kids to school. She says it takes away the opportunity for these kids to have more independence and to be proud of themselves.

Parents think that traffic used to be much safer. However, when today's parents were growing up, three times as many kids were killed in traffic. It's never been as safe as it is now. Bike accidents always make the news, but the media of course never write about all those millions of people who made it to home safely.

The advantages of cycling are well known. It's good for the environment, although only one in every 10 cyclists gives that as a reason for cycling. The bicycle is fast, cheap, comfortable and healthy.  Cycling is slightly riskier than driving, but for every day that you're statistically losing in life expectancy, you're gaining 9 days thanks to better health and less stress.  When you bike, you feel better mentally. Cycling as Medication, is the title of a booklet that the Fietsersbond has published. Don't take Prozac! Just go for a half-hour bike ride every day. That works just as well!