For anyone wishing to join our Golden Ears Surrey ride on Friday afternoon June 29 here are the details.
Anyone coming in from Surrey or New West Etc. can ride the BC Parkway or Central Valley Greenway bikeways in to Vancouver or take the Skytrain to Waterfront station.
This is sort of a follow up ride from one a couple of weeks back where we looked at Vancouver freeway issues.
Aim to be at the Waterfront West Coast Express Station early enough to get tickets and find a place to park your bike on the train. You must also buy a ticket to take your bike on the train. There is space for 2 bikes per car just inside the door. Suggest you sit near your bike so it does not get off by itself at an earlier stop.
Train leaves at 3:50 pm. The train ride is scenic along the Vancouver Harbour to Port Moody.
Then over the Pitt River and along through the farms to Pitt Meadows. Get off at 4:38pm at Maple Meadows station. I will be waiting by the Ticket vending machines.
We will ride the Golden Ears bridge with some great views, Golden Ears Bikeway, Tynehead Trails bikeway and 168 St overpass. This is some of the best cycling facilities in the lower mainland, comfortable ride most of the way, away from traffic on seperated bike paths. Stopping along the way for dinner or snacks. We will ride through some quiet neighbourhoods of Fraser Heights, view the new bridge and bike overpass not yet open, then ride the new 148 St bike lanes to Green Timbers park and lake, ending back at the Skytrain.
As some cannot make it this day we will try to do it again another time in July.
While looking out at the new 10 lane bridge being built, we can look at and discuss the industries needing transportation options and alternate ideas to building highways to transport goods and move people.
We will pass through the heart of a large industrial area serving the lower mainland supplying goods for all of us and needing transportation options. On the train trip you will view the large bulk goods movement shipping from the ports. And after crossing the Pitt River bridge note on your left the CP container terminal. Most of the containers in this yard have to move by truck through the lower mainland to destinations and ports.
Gordon Hall
HUB Surrey
Posted by MR/PM Cyclist at 4:48 PM 1 comment:

Lots of events you can participate in this Canada Day Long Weekend!
Velopalooza!
Posted by MR/PM Cyclist at 2:22 PM No comments:

Pitt Meadows is holding a public meeting on June 20, 6:30 - 8:00 pm, in the Meadows Room at Pitt Meadows City Hall, to get residents' input on its Pedestrian and Cycling Master Plan. For more information visit the City's website.

Posted by Jackie at 9:52 AM No comments: 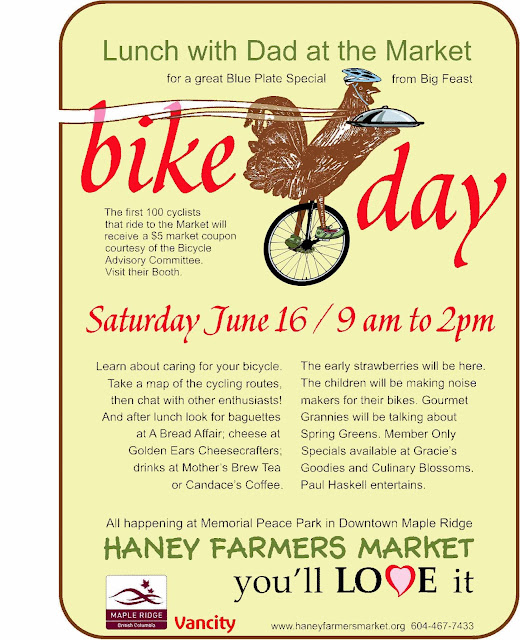 Posted by MR/PM Cyclist at 2:11 PM No comments:

Many of us are already frustrated driving on our congested roads, as more car-dependent subdivisions are added east and north in Maple Ridge.
Long gone are the days that the drive home gave us the opportunity to relax after a busy day’s work. Not only do we have to deal with  traffic back and forth to work and shop and play, but also on the streets where we live –  the car is now king.

Email ThisBlogThis!Share to TwitterShare to FacebookShare to Pinterest
Labels: sprawl

Here is a link to a very interesting blog written by one of two women just starting off on a bike tour southward from Vancouver to San Diego. I believe the ride started, Monday June 4, so we can follow the "story" and ride from the beginning.
Enjoy...
FREESPIRITBICYCLES blog
Posted by MR/PM Cyclist at 11:05 AM No comments:

By Randy Shore, Vancouver Sun June 6, 2012
The freshly completed condominium building at 60 West Cordova has 112 living units, but only 13 parking stalls - the lowest amount of parking required for a residential building in the city's recent history.
"A lot of the people buying here weren't interested in any form of vehicle ownership or use," said Michael Braun, sales and marketing manager for Westbank, which developed the building.
The parking situation at the new building reflects what Vancouver city Coun. Geoff Meggs calls a "sea change" in the car culture that has led the city to cut requirements for parking stalls for new buildings.
READ MORE:
Posted by MR/PM Cyclist at 8:43 AM No comments: